We compare 5 hyperparameter tuning search strategies in terms of (a) model quality and (b) run time on 10 learning problems with 3 machine learning algorithms using the tidymodels framework. Bayesian search gave best results, while the racing methods had lowest running time. When interpreting the results, it must be taken into account that the search strategies have their own hyperparameters, which can substantially influence the results.

Hyperparameter tuning is a crucial step in building machine learning (ML) models. Hyperparameters influence the learning process of ML algorithms, thus they are a decisive factor for model performance. A challenge is that generally, the optimal hyperparameter setting cannot be derived directly from the data before model training. A popular tuning approach is grid search, which involves first defining sets of candidate hyperparameter values, then training a separate ML model for each setting and evaluating their performance on a holdout dataset to finally select the setting with the best performance.

Flexible models usually have more hyperparameters which requires evaluating large tuning grids. For instance, gradient boosted trees are considered as state-of-the-art models for non-perceptual (tabular) data, but they involve many hyperparameters, e.g. the number of predictors randomly sampled at each base tree split, the number of trees in the ensemble, the minimum number of observations in a tree node for a further split to be attempted, the learning rate determining the weight of the last created tree towards the prediction of the ensemble, and more. A grid search for an ML algorithm with only 4 hyperparameters and 10 candidate values each requires evaluating 10^4^=10,000 models. Quiet a lot!

Iterative search methods are alternatives to this brute-force approach, as they pursue different search strategies that may be less computationally expensive as fewer evaluations are required. The basic idea of iterative search is to exploit the existing tuning results to decide which candidate hyperparameter setting to try next.

The tune package of the tidymodels ecosystem implements both grid search and the iterative Bayesian search. I recently stumbled upon the finetune package, which provides three more iterative search methods, simulated annealing, racing with ANOVA models, and racing with win/loss statistics.

This post describes a case study to explore the potential of iterative search by comparing four iterative search methods with grid search in terms of (a) predictive performance and (b) running time of the tuning process.

A glimpse of the basic ideas of the four iterative search methods are as follows:

First, we load all required packages.

For our comparison, we use ten datasets from the modeldata package, eight of which have a binominal target and two have a numeric target. We create a data frame in which each row represents a dataset, where target is the name of the target variable, and positive is the value of the positive class. Datasets with a numeric target variable have an NA value in positive.

Next, we define the ML algorithm, their hyperparameters which we will tune, and we specify the tuning methods. We will use random forests (with 3 hyperparameters), gradient boosted trees (5), and polynominal support vector machines (4).

We create a data frame that contains the names of the tuning search strategies.

Next, we augment datasets with the following columns:

After that, we create a function my_tuning which performs the actual hyperparameter tuning and records the running time of the tuning process and the model performance.

First, we create a preprocessing recipe with the following steps:

Steps 2. and 3. are necessary as ML algorithms usually require complete and all-numeric data. If we really wanted to put the models into practice, we should think about smarter imputation strategies like MICE.

Next, perform hyperparameter tuning and record the elapsed time. Note that we do not specify candidate hyperparameter values ourselves, but leave it to tidymodels to populate a space-filling parameter grid. We also leave all the hyperparameters of the tuning search methods at their default values.

Using the optimal model hyperparameters, we fit a final model on the whole training set and compute its performance on the holdout set.

We return a list with two elements: the elapsed time and the final model’s test set performance.

We rank the tuning methods, for each combination of dataset (10), repetition (5), and algorithm (3), giving 250 ranks per tuning method. Since there are 5 tuning methods in total, the rank is between 1 and 5.

Comparing median running times in the figure below, we see that racing with ANOVA (race_anova) was fastest for random_forest (median = 3.3 min), boost_tree (5.3 min), and svm_poly (1.6 min). Regarding all 10 datasets x 5 repetitions * 3 algorithms = 150 pairwise comparisons of tuning methods, race_anova was faster than bayes 99.4% of the time and faster than sim_anneal 99.3% of the time, but none of the search strategies dominated one of the other search strategies for all runs. Having a closer look at the distributions reveals that although grid search was faster than bayes and sim_anneal, there were several settings with high running times for rand_forest and boost_tree (>40 min). Overall, grid was somewhat in the middle, winning against each of bayes, sim_anneal and race_win_loss for more than half of the comparisons.

All tuning methods have their own hyperparameters which may influence both running time and predictive performance. For example, the racing methods have a burn_in parameter, with a default value of 3, meaning that all grid combinations must be run on 3 resamples before filtering of the parameters begins. Increasing this value can prevent early removal of seemingly futile but ultimately winning hyperparameters, but also results in higher run times. In this case study, we left it at the default settings.

By default, tune_grid() uses only 10 candidate hyperparameter settings. In practice, we would rather use larger grids, especially if we have many hyperparameters to tune. However, if we just double the number of candidate settings to 20 (“grid20” in the plot below), grid search becomes the slowest (considering the median elapsed time) tuning method, but also very close in performance to the winning strategy bayes. 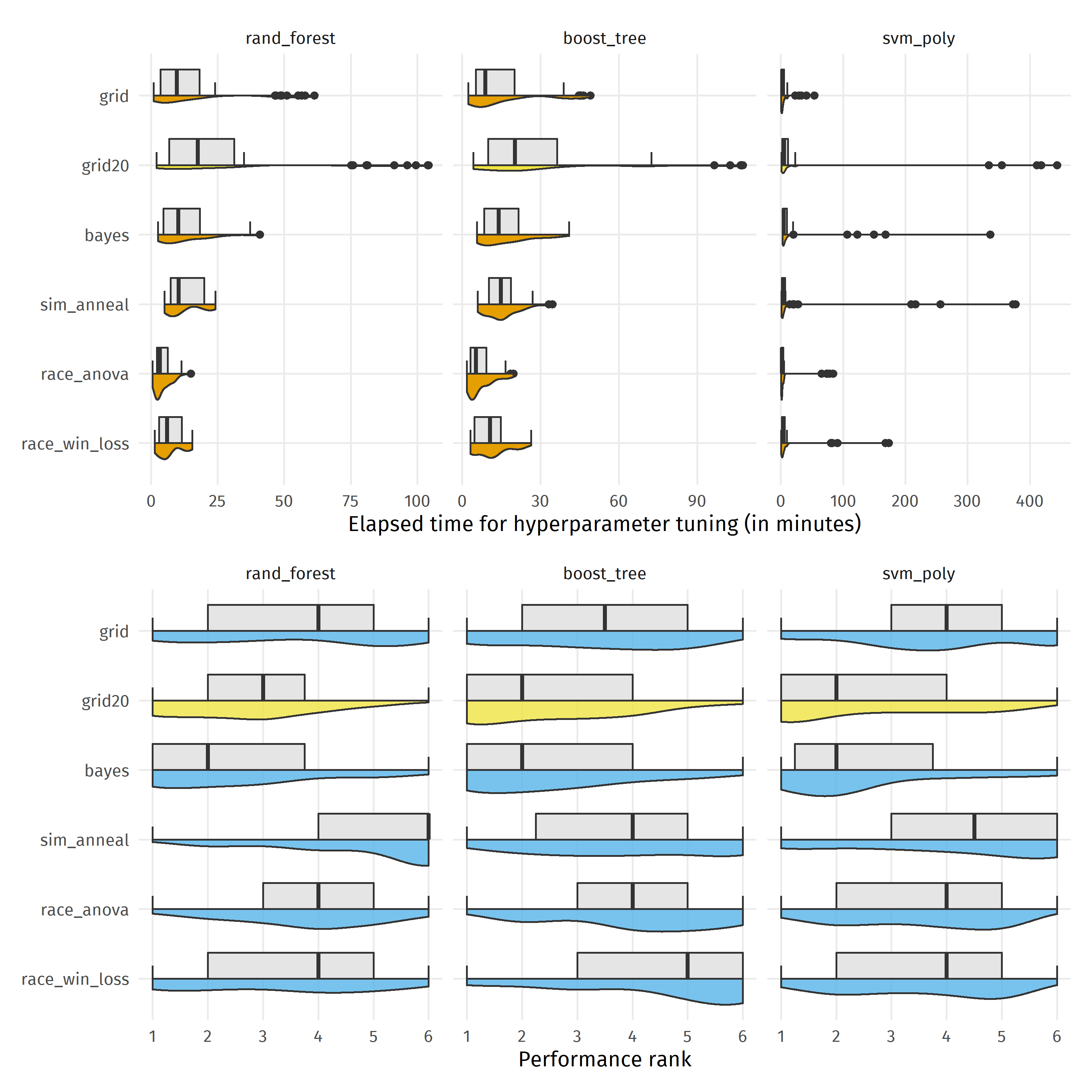